Alien farming technology: A glimpse into the future of automated agriculture

Farming, as a human activity, is thought to be the basis for civilisations and societies dating back 15,000 years, possibly even further back if you believe the ancient alien astronaut theory. 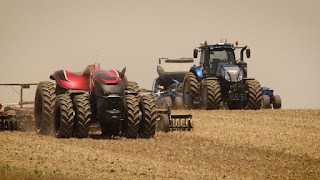 In fact, ancient alien astronauts from the Anunnaki race are thought to have introduced Earthlings to farming in the first place, and gifted humans the plough. But that’s a whole other story.

Whatever its age, farming is still a globally widespread activity today. Indeed, until around 50 years ago, the vast majority of countries around the world were agrarian, meaning their economies and societies were reliant on the income generated by the agricultural sector – not just the food produced by it.

Even today, the largest economy in the world – the US – is also the world’s largest exporter of food.

The World Atlas website drew up a list of the top 25 countries which exported the most amount of food, as denoted by the revenues earned in 2014. Below, we have republished the top 10:

These numbers would appear to be small compared to the figures in, for example, the machinery exports sector. But agricultural goods tend to fetch much lower prices than modern manufactured or hi-tech goods.

The agricultural commodities which are the biggest exports are:


The disparity in monetary value between agricultural produce and other types of goods is one of the reasons why so many farmers struggle to make a profit, and often need to be subsidised by their governments.

It’s difficult to say whether the new generation of robotics and automation technologies – collectively called “agritech” or “precision farming technology” – will help smaller farming businesses since the costs of investing in new technology can be too high for most.

But certainly, there are new technologies that promise to make farming more efficient, more productive and less reliant on pesticides, which has always been a controversial subject.

Drones are an interesting technology being used in a variety of sectors, but agriculture, along with large-scale construction and mining, would seem to be the perfect environment for what could be seen as flying scarecrows.

A drone could be programmed to watch over a field and scare away birds and other critters that may prevent the crops from developing naturally, or developing at all.

According to a report by Bekryl Market Research, the forestry and agriculture drones market is set to grow by almost 40 per cent this year to reach $460 million.

Bekryl adds that the largest suppliers of these drones are:

DJI has even launched what it describes as its “first agricultural drone”, meaning it is dust-proof, water-resistant and can be loaded with “10 kilograms of liquid for crop-spraying and can cover between seven and 10 acres per hour”.

And the entire drone ecosystem has become very diverse, with software and platforms and events galore. A good place to look into the sector seems to be the UAV Coach website.

I’ve got my IoT on you

A more constant monitoring system has been demonstrated by a variety of researchers, who used relatively low-cost computing components and sensors, networking them together to build such things as phenotyping systems.

The CropQuant system, which we reported on a while back is said to analyse the crop’s DNA for early identification of typical genetic traits – such as drought, heat tolerance, disease resistance and nutrition; reducing potential costs.

One of the inventors of CropQuant, Dr Ji Zhou, says: “CropQuant will provide an affordable solution to prevent crop losses, contributing to food security, as well as industrial and academic purposes.”

CropQuant is one of many systems being marketed in the fast-growing but still nascent field of precision agriculture.

Another much-larger-scale precision agriculture system is being developed by two German industrial giants – Bosch and Bayer.

Bosch is a manufacturer of a huge range of engineered products, and has recently showcased a farm robot called Bonirob, which forms part of what is clearly the company’s strong interest in the farming sector, as evidenced by the establishment of its DeepField Robotics business unit.

Bayer is known as a biotech or drugs company which was recently given the green light to buy Monsanto, the controversial agritech business closely associated with genetically modified foods.

The “merger” – which looks more like a takeover of Monsanto by Bayer – is reported to be costing Bayer more than $66 billion, and is “terrifying” farmers, according to an apparently hysterical report on BusinessInsider.com.

Bosch and Bayer say their precision agriculture system could help improve harvests by 50 per cent, which, coincidentally, is the amount that will be needed to feed the global population by 2050, according to the United Nations.

One of the key features of the Bosch-Bayer farming system is that, according to them, it can monitor whole fields and only spray pesticides on specific areas, as and when needed, rather than cover the whole region with them, as used to be the case in the past.

Such a huge range of new technologies are being developed in this sector that it’s quite difficult to keep up.

On this website, in the past year, we have seen at least half a dozen new autonomous vehicles developed for applications in farming.

From the driverless tractor, showcased by CNH, to the combine harvester for strawberry farming, demonstrated by Harvest Croo, as well as the many other, smaller startups launching their own solutions… farmers are being spoilt for choice.

We should make a list of all the solutions available so far, and we will, but one that comes to mind was the recent story about a solar-powered farming vehicle developed by EcoRobotix, which has raised $11 million for its innovation.