The 2018 World Vegetable Map shows essential vegetable trade flows and highlights some key global trends in the sector, such as the growing importance of production in greenhouses and vertical farms, as well as the popularity of organic vegetables. 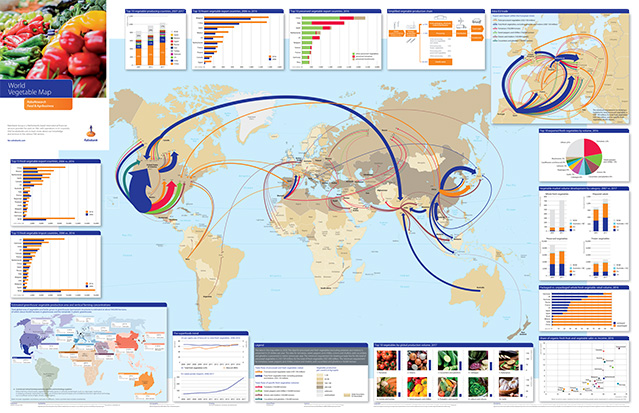 The global vegetable market is still predominantly a local market. Only 5% of the vegetables grown are traded internationally. But that share is increasing. Easy market access is vital for export-focused vegetable-producing countries like Mexico, Spain, and the Netherlands. Over the last decade, Mexico has further expanded its prominent position on the North American market, and internal EU trade has continued to grow.

Market for fresh (prepared) vegetables up, demand for canned vegetables down

An estimated 70% of all vegetables grown in the world are sold as whole fresh vegetables. This market is still on the increase, mainly outside of the US and the EU. Processing of vegetables (freezing, preserving, and drying) is a good way to prevent wastage, but global consumption of preserved (canned) vegetables has decreased over the last decade. At the same time, demand for frozen vegetables has increased by an average of 1% per year. Demand trends seem most favourable for vegetables that are convenient to eat and prepare and/or do well on (social) media because of considered health effects or their visual appeal. Examples are all kinds of (prepared) salads as well as sweet potatoes. EU imports of sweet potatoes (mainly from the US) have tripled in just four years’ time.

Organic foods are gaining market share around the world. The share of organic fruit & vegetable sales (in total fresh fruit & vegetable sales) has already passed 10% in wealthy countries such as Switzerland, Sweden, Austria, and Denmark (see Figure 1). In the US, this share is 9% and quickly growing. Income is not the only determinant for organic vegetable consumption. In the Netherlands, where the average income per capita is similar to that of Sweden and Austria, the market share of organic vegetables is only 5%. The reasons behind this are not clear, but it is likely related to supermarkets’ decisions on the category, price, availability, and quality of conventional vegetables, as well as cultural factors. 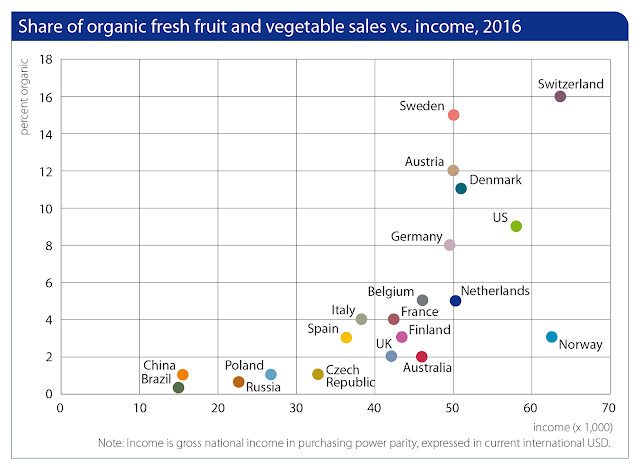 As most fresh vegetables are highly perishable, easy market access is essential. In Latin America and Africa, vegetables are mainly sold regionally. Growing circumstances (climate, water availability), production costs, exchange rates, and trade agreements can trigger vegetable trade flows. Distortions in NAFTA or EU trade agreements (such as Brexit) will negatively affect vegetable trade. In the last decade, Mexico has further extended its very prominent position as North America’s vegetable garden. Spain and the Netherlands are key vegetable exporters within the EU (see Figure 2). Morocco has emerged as an up-and-coming vegetable supplier for the European market. 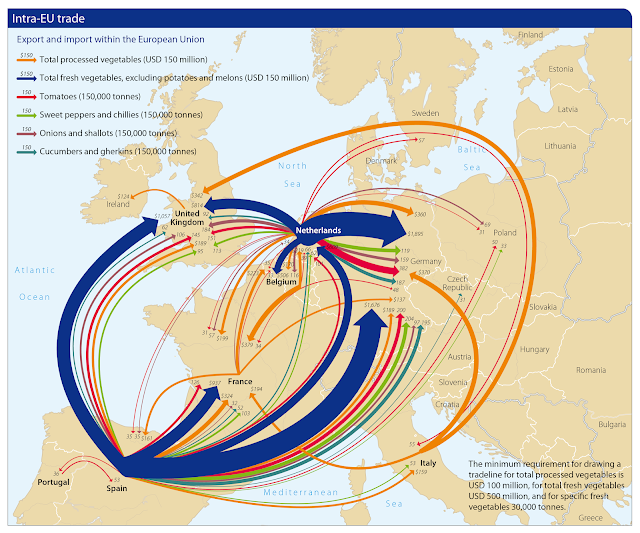 A significant change in the world of vegetables is the rise of new vegetable-importing nations. Vegetable imports used to be concentrated in North America, western Europe and Japan. But gradually, countries like India, China, and the United Arab Emirates have upped their vegetable imports. Russia has also shown an increase in trade, despite the 2014 import sanctions for vegetables from the EU, the US, and a number of other countries. Currently, Belarus, Morocco, China, Armenia, and Azerbaijan are important vegetable suppliers to Russia.

The rise of controlled production in greenhouses and vertical farms

Globally there is a growing need for vegetables that are available year-round, produced in a safe and resource-efficient manner, and are of a consistently high quality. Consequently, vegetable production in greenhouses and vertical farms is rising. The area of greenhouses is estimated at 500,000 hectares, including roughly 40,000 hectares of glasshouses. Recently, we have seen vertical farms popping up in various places around the world, mainly in the Northern Hemisphere close to large consumer concentrations.
Vertical farming entails growing crops (often leafy vegetables) in a controlled environment using artificial lighting. As investments and electricity costs are relatively high, it is (still) challenging to run an economically viable vertical farming business. That said, discerning customers are willing to pay a premium for locally grown vegetables grown in a contained environment.